The cultural city of Izamal has a rich history and spirituality. Izamal is honored by being named after the god Itzamna. The founder of the Mayan culture, Itzamna brought his people maize and cacao and taught them writing, healing, and the use of calendars. As the bringer of culture he became the state-god of the Mayan empire. He bears the title of 'lord of knowledge' and is known for his red hot healing hands. 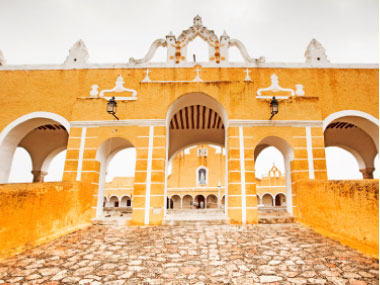 Izamal is a magical city and has always been a place of magic and healing. Since the time of the Conquest, Izamal has been home to many miracles, attributed now to the Virgin Mary. The late Pope John Paul II visited Izamal in 1993 and has been one of Izamal's claims to fame ever since. Visit inside the church and see the beautifully restored altarpiece, the stained-glass window of St. Francis of Asissi, and many statues along the walls. On the second floor the statue of Our Lady of Izamal, Queen and Patron Saint of Yucatán, is housed.

Known as the city of hills, the yellow city, or the city of three cultures, Izamal may be the oldest city in the Yucatán. Almost every building is painted yellow and the calesas (horse and buggy carts) taxi you down cobble-stoned streets, Izamal has a quaint and distinctive look.

Things to see and do:

Enjoy the grand Light and Sound show at the Conventevery Tuesday, Thursday, and Saturday at 8:30 p.m. The show is a rich display of Mayan history with inspirational lighting and music. The convent setting makes it unique to the various other light and sound shows around.

Tour the Mayan pyramidsthroughout the city including Knich Kakmo, Kabul, Itzamatul and El Conejo. Knich Kakmo is a largely unrestored pyramid with a two acre base. It was one of the greatest structures of the ancient Mayan world.

Visit the Franciscan conventthat the Spanish conquerors built using stones from the pyramids. The convent features an atrium surpassed only by the Vatican in Rome. The Franciscan convent is known for the monk Fray Diego de Landa, who, in his ignorance, burned all the Mayan scripts. Then, feeling remorse for what he had done, Frey Diego tried to rewrite all he could remember of the ways of the Maya.